Reggae Britannia News Articles ‘I went off the rails’: how Benjamin Zephaniah went from borstal to poet

‘I went off the rails’: how Benjamin Zephaniah went from borstal to poet 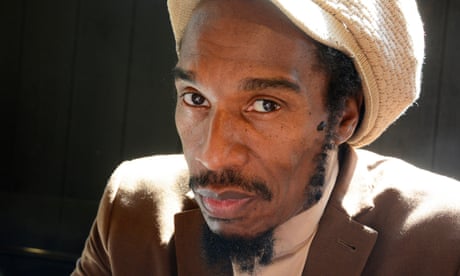 Benjamin Zephaniah: ‘I’m almost 60 and I’m still angry. Everyone told me I would mellow’

Speaking to the Observer, Zephaniah, born in Handsworth, Birmingham, almost 60 years ago, recalled how being in a gang made him feel like Robin Hood “redistributing wealth”, and how they were “frequently in trouble with the police”. There was peer pressure to commit crimes, from burglary to stealing cars, even beating up a man for being “queer”: “They were all beating him up. I didn’t want to … One of the kids looked at me, saying, ‘Go on, give him one’.” Zephaniah gave the terrified man what he describes as “a little token kick”. It was enough to satisfy the young thugs, but he sensed gratitude in the man’s eyes.

He became so good at picking pockets that he saw it as an “art”: “There’s something about going into someone’s wallet when they’ve got it inside their jacket when you bump into them and taking it without them knowing. My trick was to take the wallet, take what I wanted and put [the wallet] back.”

Beaten regularly by his late father, a postman from Barbados, his mother tried in vain to escape with young Zephaniah, seeking shelter at women’s refuges but being turned away: “They wouldn’t help her because she was a coloured lady. They were not used to seeing ‘people like you’. So I’m angry at the lack of help that she had.”

In borstal he faced a different horror – the threat of sexual abuse. He cannot forget the boy who left their dormitory every night “almost like a ghost … to be fiddled by the teacher”.

“One night, we all got up and tried to stop him. He begged us to let him go [because] this teacher knows some member of his family and is going to blackmail him … The people in these places were supposed to look after us. Most of them wanted to sexually abuse us.”

Zephaniah left school at 13 without qualifications, partly because of his dyslexia. But his love of poetry was inspired by his mother and going to church, where he heard “charismatic preachers” deliver “a kind of performance poetry”. He taught himself to read and discovered a publishing co-operative that brought his work to the notice of mainstream publishers. He made his name through performance poetry with a political edge, as well as novels and plays. Appointed professor of poetry at Brunel University in London, he has 16 honorary degrees and was a candidate for the post of professor of poetry at Oxford.

His autobiography, The Life and Rhymes of Benjamin Zephaniah, will be published by Simon and Schuster on 3 May, and he will be touring 19 towns and cities in May and June.

Seeing his autobiography as “a social history of Britain” that also charts the struggle for racial equality, he begins with his mother, to whom he remains close: “There’s not many stories about the plight of Caribbean women leaving Jamaica. My mother saw a poster that said: come to the mother country, you’re really welcome here.”

After working as a cleaner in Sheffield, she became a nurse in Birmingham. But life was tough at home. She repeatedly tried to run away from Zephaniah’s violent father, hiding in rented rooms and giving her son a “false name”.

But he always found them because he worked for the post office, said Zephaniah. He would beat her and “drag her home”.

He added that his siblings stayed with their father, and think he is a hero: “I said to mum, ‘Am I exaggerating?’ She said, ‘You only saw a bit of it’. God, I saw what I thought was pretty bad.” In his BBC Radio 4 play, Listen to your Parents, Zephaniah wrote of a boy who, “night after night, listens to his father beating his mother”: “People in the BBC tried to get me to say this was my story. I said, it’s not.”

Far from mellowing with age, he is “angrier” than ever and despairs for today’s youth. In the Lincolnshire village where he lives they have been “robbed of facilities” and street-lights are switched off at night: “Teenagers can’t even sit on the streets and talk.” He is not surprised some turn to crime.

In the mid-1990s, he felt optimistic: “I knew kids that just didn’t see race at all.” But optimism has evaporated: “In the Asian community, it used to be ‘just Asian’. Now it’s Muslims, Sikhs, Hindus – and they’re all suspicious of each other. The black community just used to be ‘the black community’. Now it’s Trinidadians and Jamaicans… We were all united, men and women. Now women are saying ‘we want safe spaces in our universities’.

“I feel we’ve taken so many steps backwards and so quickly. I used to say that, when I get to 60, it’s not going to be a perfect world, but it’s going to be so cool, I can relax, I can turn into a Rastafarian comedian. No way, I’ve got to be the angry black poet again.

Born 15 April 1958, Birmingham, the son of a Barbadian postman and a Jamaican Jamaican. He was dyslexic, attended an approved school but left at 13 unable to read or write.

Career Aged 22 he moved to London and published his first poetry collection, Pen Rhythm. His second collection of poetry, The Dread Affair: Collected Poems (1985) contained a number of poems attacking the British legal system, while his third, Rasta Time in Palestine (1990), was an account of a visit to the Palestinian occupied territories. He went on to write books for children and young adults, produce music records and act or write in television, film and radio productions. He was the first person to record with the Wailers after the death of Bob Marley in a musical tribute to Nelson Mandela. He was also poet in residence at the chambers of Michael Mansfield QC, and sat in on the inquiry into Bloody Sunday and other cases, these experiences leading to his Too Black, Too Strong poetry collection (2001).

Do the limbo! How the Windrush brought a dance revolution to Britain

Music is My Drug

0 thoughts on “‘I went off the rails’: how Benjamin Zephaniah went from borstal to poet”

KEN BOOTHE – IS IT BECAUSE I’M BLACK